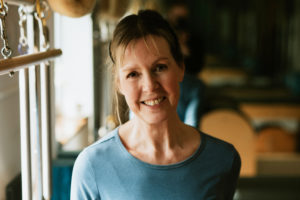 Sara commenced her Pilates training in 1996 with Dolly Kelepcz at the University of Nevada, Las Vegas towards the end of a long and successful dance career. While undergoing treatment for a hamstring injury, Sara heard about the Polestar teacher training course, run by Elizabeth Larkam and Brent Anderson, and gained her rehabilitation qualification with them in 1998.

On returning to the UK Sara became a teacher at the Trevor Blount Pilates studio in South Kensington and gained her Pilates Foundation membership qualification in 2004. While still working in South Kensington, she set up a studio with a colleague in Fulham, Pilates@fitrooms, which they ran for four years. In 2014 Sara relocated her Pilates studio to Hinchley Wood Practice.

Sara has been privileged to be trained by some of the top teachers in the Pilates world and has attended numerous workshops given by the many dedicated teachers committed to passing on Joseph Pilates’s original philosophy and work, much of which is still relevant today. Sara is equally committed to passing on the many benefits of practising Pilates to everyone, regardless of age or ability. 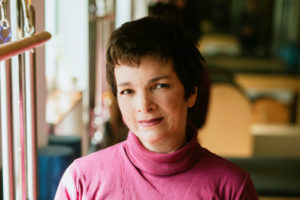 Viviane comes originally from a dance background, having danced professionally with the Palais des Beaux Arts, Charleroi and Liege in her home country of Belgium. She qualified as a physiotherapist in 1992 (ISCAM Bruxelles). Viviane then worked as a physiotherapist in Singapore and Hong Kong, where she trained as a Pilates teacher with Julia Ellis and Rochenda Rydeard, and followed her training into teaching there.

On returning to the UK Viviane joined the Pilates Foundation in 1997 and worked at the Trevor Blount studio in South Kensington for two years. Viviane founded her own private studio in Surbiton in 1999 where she teaches one to one and small group classes combining physiotherapy and Pilates. She also teaches bigger group mat classes in Thames Ditton. We are delighted to have Viviane as part of our team. She teaches at HWP on Friday mornings. 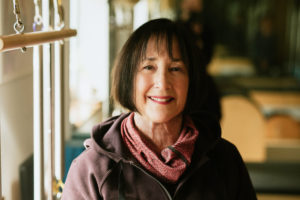 Mary discovered Pilates in 1998 through experiencing back pain and was struck by the fact that every generation was represented in the studio. She realised that movement was the key to good health, energy and self satisfaction. Mary found that Pilates worked for her body for the last 30 years and she soon decided to train as a teacher.

After a highly successful career in professional sales and customer service: first as a TEFL teacher for the Japanese community in Amsterdam and then in luxury retails sales and design in London, Mary embarked on a Pilates Foundation matwork training with Anouska Boone of Pilates in Motion, Ealing in 2012. She then completed her studio training soon afterwards.

Marys training, years of experience and commitment to Pilates excellence have enabled her to support her clients in rehabilitation and in good health, improving their movement patterns, strength and flexibility.   She brings with her teaching, enthusiasm, humour and always compassionate professionalism.

We’d love to answer any of your queries and show you around, please get in touch!

Here’s what people say about us.